I watched a brilliant video from Shimelle that was included in her Cover to Cover class.  I originally bought it separately from TrueScrap1.  Several of the layouts are inspired by Shimelle's blog and classes. 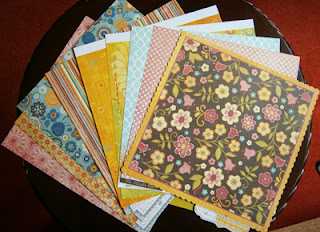 Adding in three partial sheets from the same collections.﻿ 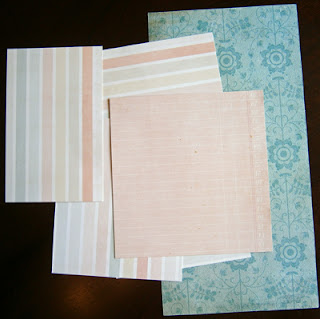 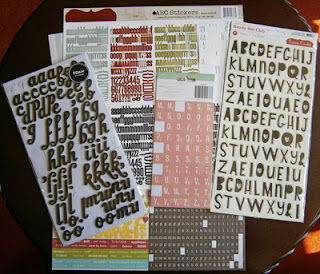 A few stickers and embelishments. 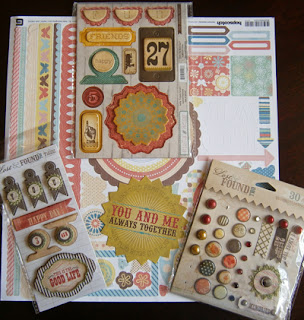 I cut up all the full sheets of patterned papers; using the ideas from Shimelle's class.  I have some big boxes, 12" wide strips and samller boxes.  The layouts will give you an idea of the type of dimensions I used.  If I did it again, for my scrap style, I would like more 12" strips.

Here it is all cut up and for some unknown reason it makes me so much happier than the full sheets!  Possibly because I like using up scraps and used to love making scrap quilts. 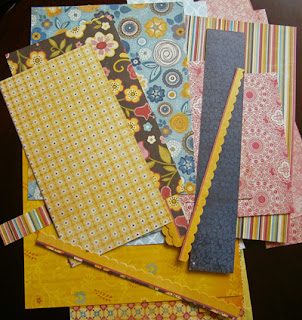 Here are the B sides. 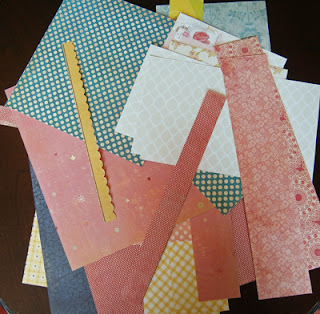 The first pages I made where of photos from an owl evening.  I had been meaning to make this page for ages but didn't know what papers to use.  The photos are not great quality and hubby had acidentally put his camera on the 'majic' setting - which seems to make everything orange.  However, It was a great evening so I wanted to include the photos in my scrapbook.  The first makes me laugh as hubby is licking his lips as if he wants to eat the owl!  This was an amazing evening that I would recommend to anyone who likes birds.  The owls are suprisingly light and one flew to our arm and we held others. 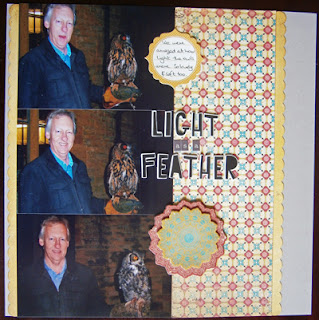 Here is the co-ordinating page.  The evening was a gift for my birthday last year, taken just before my birthday this year.  As explained above my hair was not that orange! 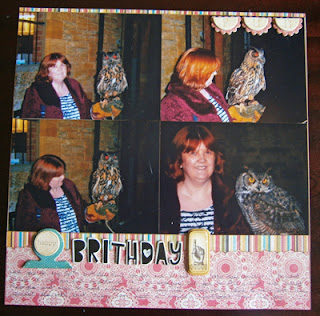 This is the starting point for the next layout. 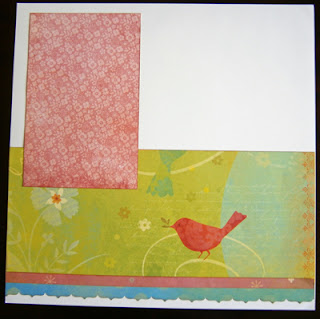 And the finished version.  No idea where or when this photo was taken.  I've written about how hubby loved and kept his 'tash' for 25 years and how much I hated it! 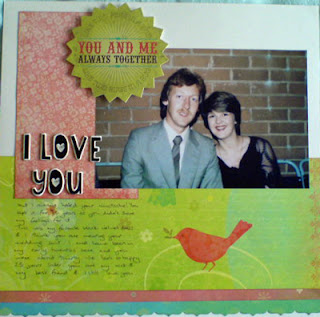 Here is an old photo of my grandma and her friend.  I think it would have been taken at Blackpool.  It makes me laugh as here she is on the motorbike but she never ever wore trousers and if you look closely she even has a skirt on in the photo.
A note of caution doillies tend to tear so you have to commit quickly when you add letters stickers. 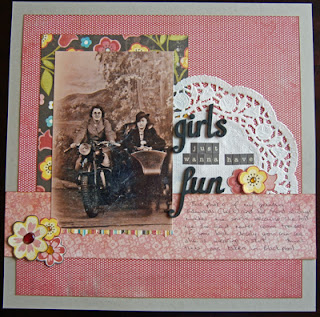 This next one is just a starting point so far.  I also have three card starting points using the same background card and flower paper.  The patterned papers seemed to be wider than the StampinUp card and when I tried to shave off a tiny bit my trimmer just chewed it up.  So I've cut it up and will share the cards when I finish them. 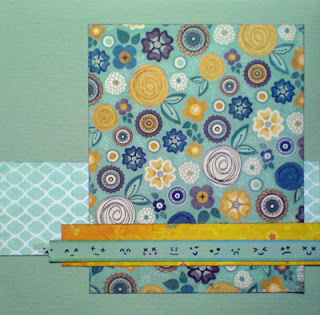 Still loads of pieces left.  Not sure yet if I will keep going or add them to my rather bare scrap box.

Yesterday we braved the rain and went to see the Olympic Torch.  We had planned to go to Newtown but decided that we were not brave enough to cope with The Wanted's teenage fans.  It is nice to note that the man (Jim)  who we saw carry the torch has done a lot for children's sport over the last 50 years.  Our photos are rubbish but it was a great atmosphere and fun to be there.  Later we went shopping in Lichfield.
Have a lovely day. x
Posted by Anne Essex at 6:54 pm

Oh Anne they are fantastic, I'm loving the colours of each of them - the class looks great!

Anne Essex
Have you ever walked round a craft shop and thought 'gosh I have more stuff than this'? Well I have to confess that has happened to me more times than I care to admit. So I thought it would be fun to follow in my son’s footsteps (http://www.blagman.co.uk/) and have a go at writing a blog to display my cards and encourage me to use up some of my stash.